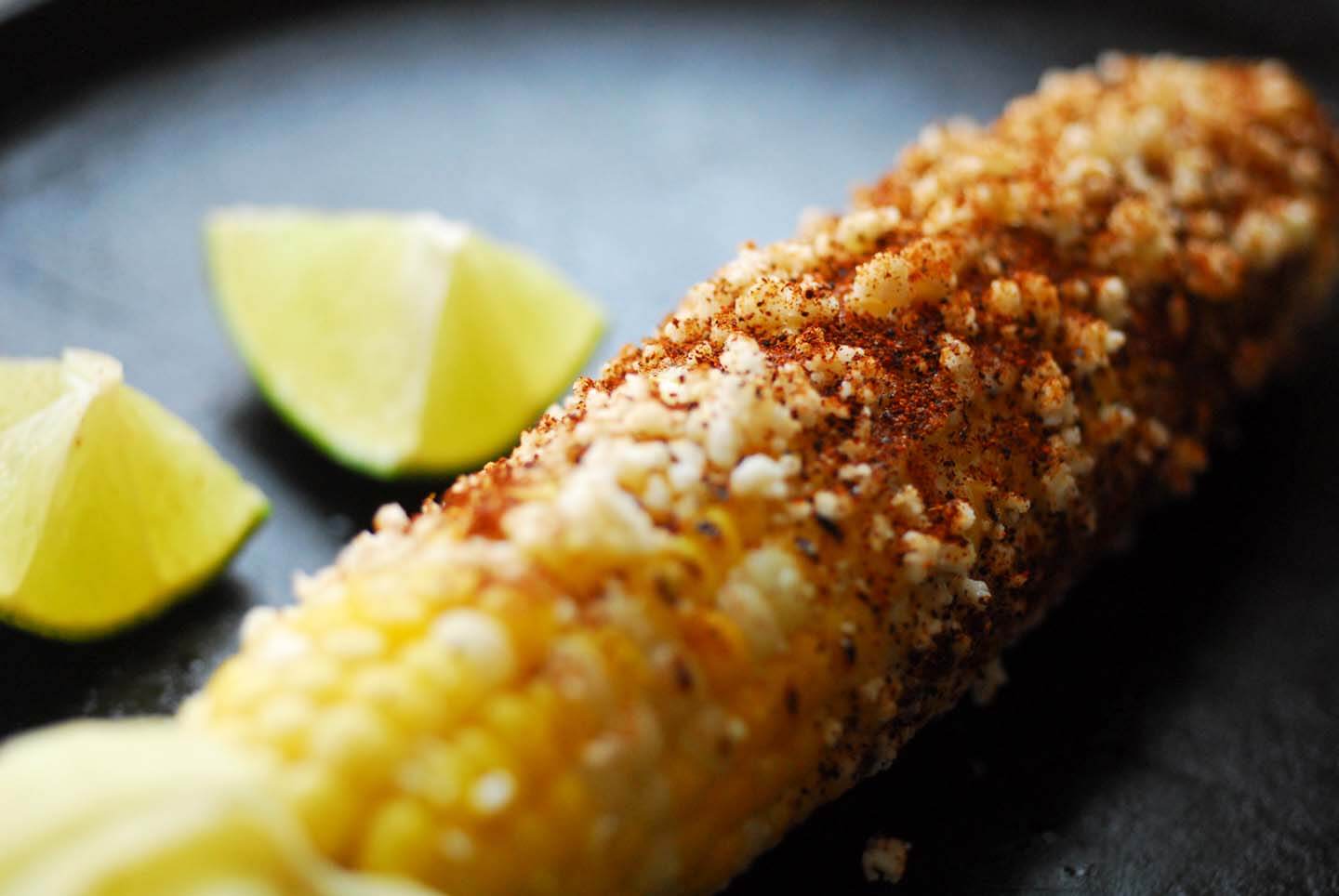 But underneath all the oppressive heat and haze is a ray of joy: the farmers’ market. The growing season is at its peak right now and I am in awe of the glorious explosion of fruits, herbs and vegetables. There is so much bounty I have a hard time deciding what to buy as I want it all! I like to shop for food so I end up at the greenmarket at least twice a week. And yet with my frequent visits, I’d somehow managed not to buy corn this year. Perhaps it’s because corn gets such a bad rap these days, or perhaps it’s because there’s such an abundance it didn’t feel precious to me. But like all fruits and vegetables, its season is finite and while its presence is inescapable in a myriad of processed products, I try to avoid those so I probably don’t have too much corn flowing through my system. (By the way, if you have access to Whole Foods, its house brands of ketchup, mayonnaise and Worcestershire sauce are all made without high-fructose corn syrup and they taste good, too!) Plus, there’s nothing like eating fresh corn on the cob. After all, I come from a family of corn growers and I have fond memories of running through fields filled with tall, waving stalks; shucking bucket after bucket while sitting on the front porch; sinking my teeth into the colorful varieties my family had harvested; or sharing with college friends my grandfather’s popcorn on the cob. Like almost all dishes, there are endless variations on elote, but most commonly it’s a cob of corn slathered in mayonnaise, cotija cheese (a semi-hard, crumbly cheese that resembles grated Parmesan), powdered chile peppers and lime juice. Sometimes, you can find it without mayonnaise and instead drenched in butter, margarine or crema. The corn can be prepared many ways, such as steamed, roasted or grilled. And while it’s often served with the cob stuck on a stick, I’ve also had it with the corn scraped off into a cup with the condiments on top ready for mixing.

No matter how you eat it, however, the end result is always the same: a sweet, crunchy, fiery, juicy (and often) messy taste of summer. I don’t have a grill, so I roasted my corn in the oven and then blackened it on my stove-top gas burner. You can also blacken it under the broiler, though mine is one of those sliding-drawer contraptions and as it’s so shallow I was afraid the husk might catch on fire. It’s best to spread the condiments on the corn while it’s still hot as this insures the fats will melt in between the kernels, providing even more succulent eating. The ground chiles (I like to use cayenne for its heat and brightness) and lime juice are essential for mitigating some of the sweetness of the corn and mayonnaise, and the cotija adds a pleasant salty, soft texture that goes well with the corn kernels’ juicy snap.