The first time I recall having brisket, it wasn’t the smoked hunk of beef that many people associate with Texas. No, instead it was an oven brisket prepared by my grandmother. While normally our pot roasts were made with chuck along with lots of potatoes and carrots, this roast of brisket had been slowly cooked in a tomato-based sauce. It was tender, juicy, and delicious.

Recently, a friend in New York was lamenting that their briskets never tasted anything like the briskets they ate at home. I asked what was the problem and he said that he didn’t have a yard and therefore he didn’t have a smoker, and without those two things his brisket wasn’t as he wanted it to be.

Being in the same situation I know how he feels, yet there are plenty of oven briskets being made in Texas, too, so it’s never been that much of an issue for me. As long as you can reconcile that the two slabs of beef will not taste the same, then you can appreciate the unsung glories of a brisket not cooked outside on a smoker but instead slowly roasted in an oven. 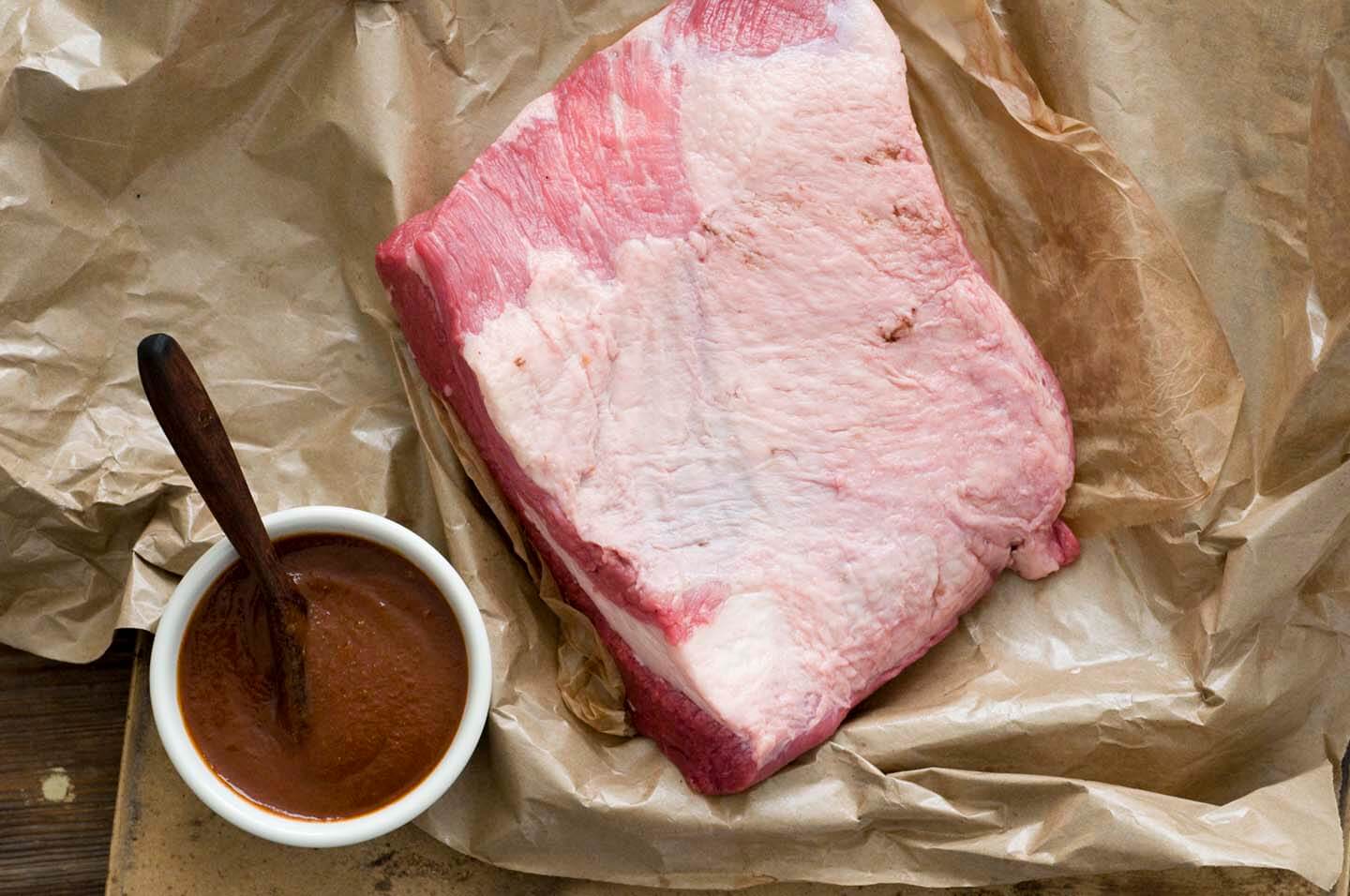 While I’m a fan of thick, juicy slices of brisket served with mashed potatoes, sometimes when I make a brisket in the oven, I’ll shred the beef and then use it in tacos, enchiladas, or nachos. I have several different ways that I like to prepare brisket, though I recently slowly cooked my brisket in a smoky, sweet sauce made from Dr Pepper and chipotle chiles and it turned out superb.

There’s a famous oven brisket recipe that’s made from Coca-Cola, onion-soup mix, and chili sauce. My pulled brisket is a take on that, yet I’ve made my sauce with Dr Pepper instead of Coke, and used real onions, along with some garlic, molasses, ketchup, spices, and chipotle chiles for added heat.

While I was starting a bit more from scratch with this recipe, it’s not difficult. First I made the Dr Pepper sauce, which is simply throwing a bunch of things into a blender. Then I placed the brisket in a roasting pan, covered it in the sauce, tightly covered the pan, and let it hang out in a low oven for a few hours.

After a couple of hours, an inviting aroma took over my entire home. It took tons of will power not to open the oven and take a peek, but I continued to busy myself with other things as the brisket slowly cooked and became tender in both its own juices and that Dr Pepper sauce.

When I finally pulled the brisket out of the oven, I let it rest while reducing the pan juices. Then I shredded the brisket with two forks, poured in the reduced pan juices and let the two mingle together to create a spicy, savory, and juicy plate of pulled beef. (That said, if I’d been more inclined to serve this Dr Pepper brisket in a more traditional sliced manner, I’d would have let it rest overnight in the refrigerator before slicing, and then served it with the pan juices on the side.)

If you make this, know that the mountain of pulled brisket will be staggeringly delicious. To serve it, I like to slip mine into fresh tortillas and top with onions, jalapeños, and cilantro for a smoky, sweet Tex-Mex take on the classic chopped beef sandwich. Though you can also use the pulled beef in enchiladas, on nachos, on buttery Texas toast, in queso, in enchiladas, or on a bun. It’s an easy-going protein that is happy just about anywhere you introduce it. 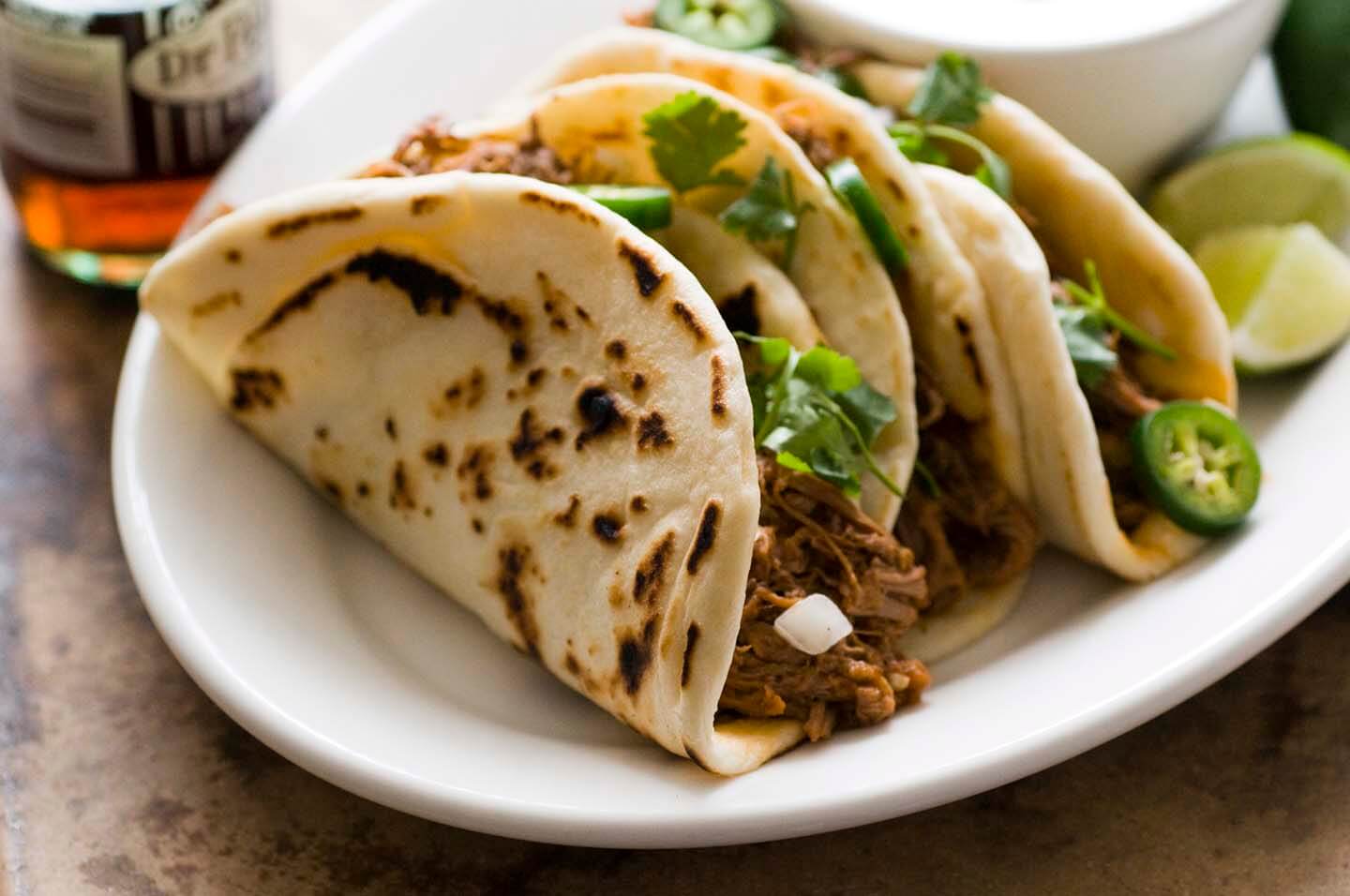 Like most meat-eating Texans, I am a huge fan of smoked brisket. There are plenty of reasons why this glorious piece has received so much praise. But at the same time, I am not opposed to eating brisket cooked in the oven. For most people, it’s a lot more accessible, and yes, while it doesn’t taste the same what comes off the smoker, it’s still a royally delicious way to cook beef.