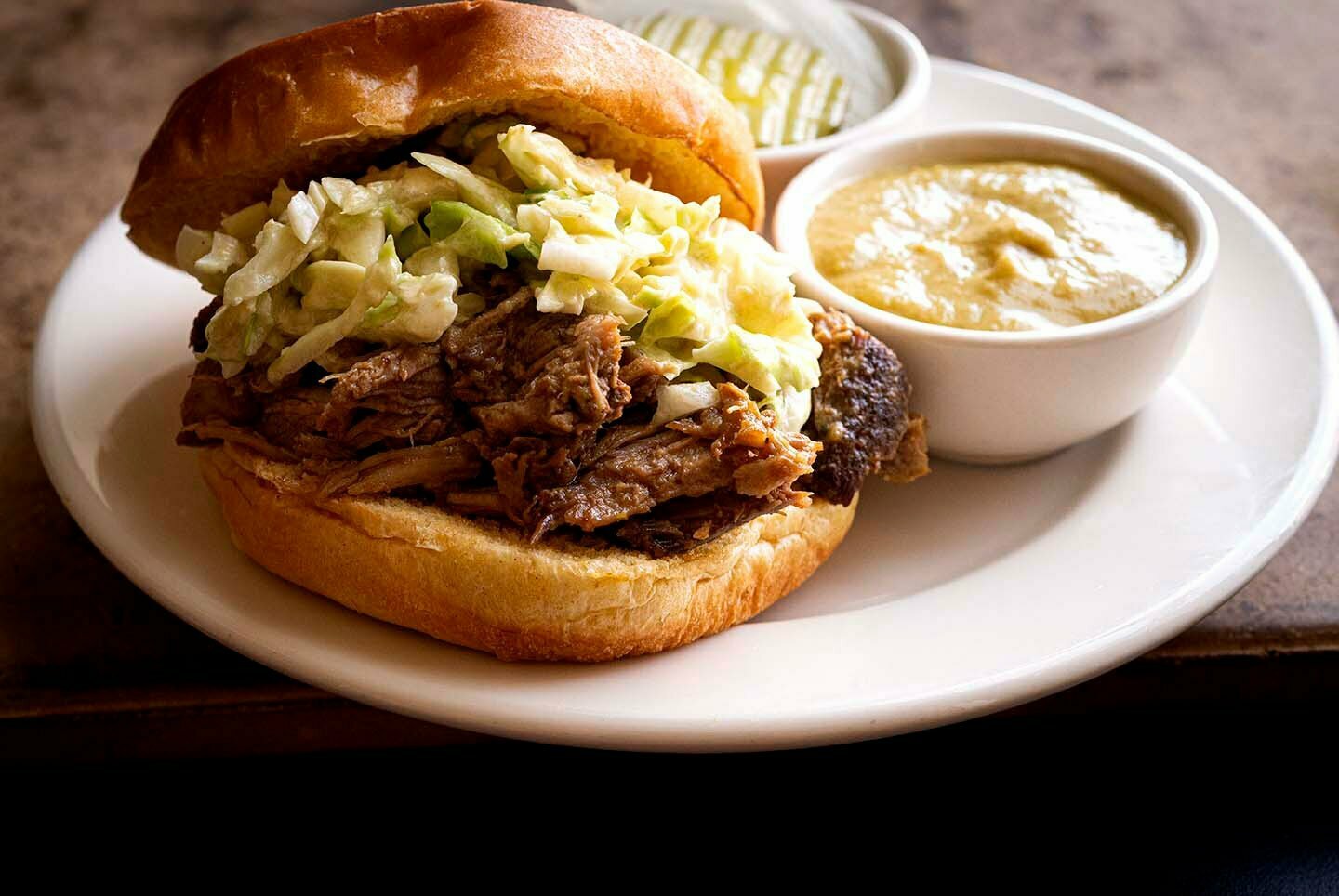 Over the weekend, I went to a family barbecue at my Uncle Bubba’s house. He was celebrating a milestone birthday, and all his siblings, including my dad, and their spouses came into town to honor the occasion. There were cousins and grandkids on hand, as well. It was a fine time.

Bubba is quite creative and has built himself a beautiful pit to smoke pounds and pounds of meat. It’s made from cinder blocks and metal, which he welded himself, and it produced for the family a bounty of smoky proteins, including brisket, pork ribs, beef ribs, sausage, and chicken, along with a big tray of pulled pork.

When he and I were talking about his spread, he showed me some store-bought sauces he had for those who may require it, though he and I agreed that if properly done, smoked meat doesn’t need any enhancement. Indeed, I ate brisket, chicken, and ribs, and each bite was perfectly seasoned and tender and moist. I was satisfied.

The next day, we returned to his house and we enjoyed another round of the barbecue. I noticed that the pulled pork was simmering in sauce on the stove, though the day before it had been unadorned like the other meats.

I asked about it, and Bubba laughed and told me it had dried out from sitting over warmers, and the only way to resurrect it was to drench it in sauce. Curious how it tasted, I spooned some of the pork onto my plate, and it was still excellent with the sauce along with some pickles my cousin had made. 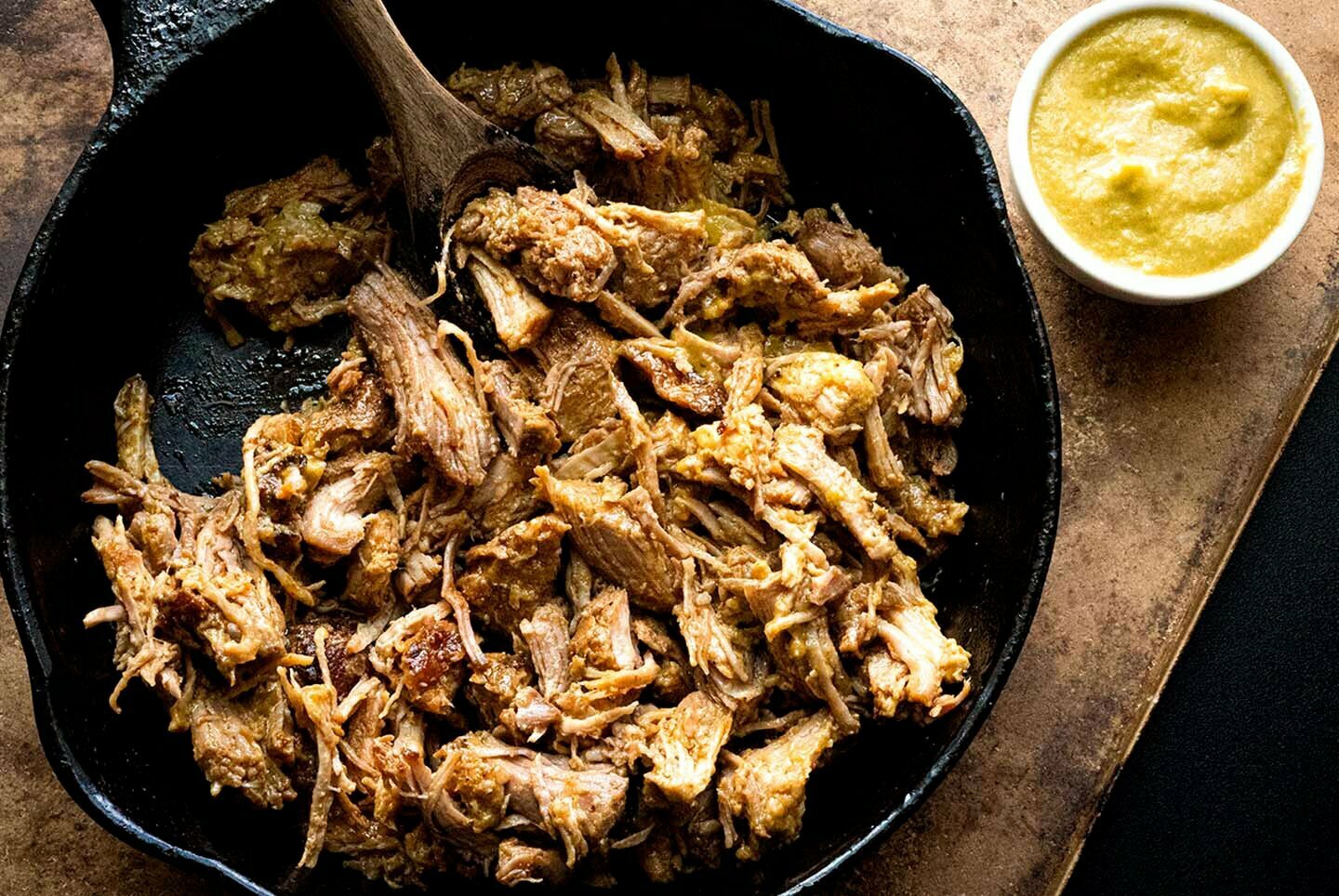 Now, I don’t have a yard so I haven’t taken on smoking my own meats yet (though with family members who do enjoy it, perhaps it’s time to learn!) but making a pork shoulder and saucing it is a good approximation of barbecue that can be done anywhere.

Bubba sauced his pork with a tomato-based sauce, which is a classic Texan flavor that’s delicious. Though El Paso-native John Lewis, who is a pitmaster that honed his craft in Austin with Aaron Franklin and at LA Barbecue before moving to Charleston and opening his own Texas-style place, serves a sauce made with his hometown’s green chiles instead of tomatoes. He’s shared his recipe with several publications, so I recently made a batch then applied it to shredded pork that I’d slowly roasted in the oven. 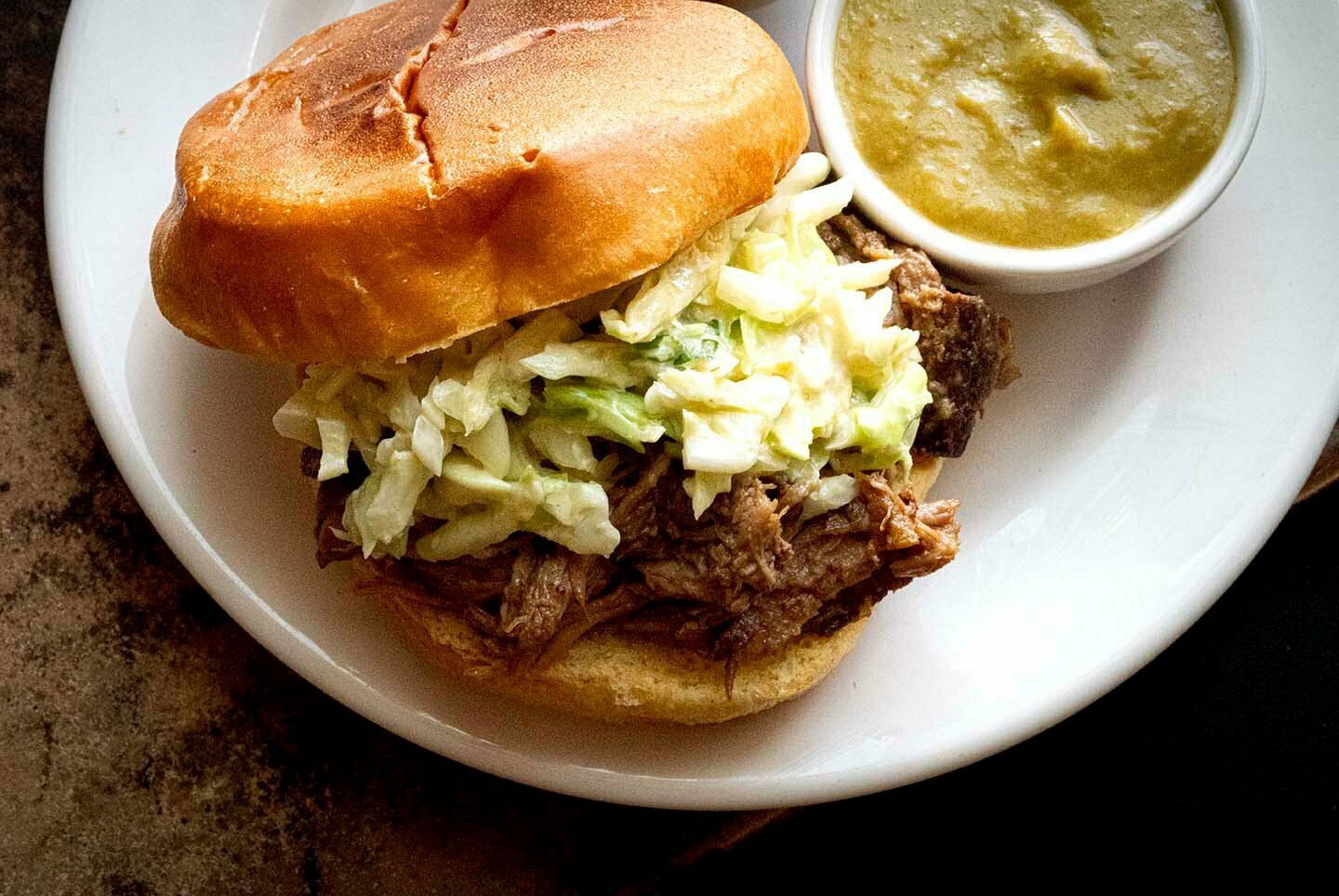 The sauce is a blend of mustard and green chiles, which goes very well with pork, along with seafood and poultry. It has a tangy kick that’s a touch sweet from honey and ketchup, though it’s not cloying at all. I applied it to an oven-based roast that had been pulled, though it would work well with one that had been smoked, too.

For the Hatch chile barbecue sauce:

While you may use any coleslaw that you prefer, I have found that 4 cups of shredded cabbage, 2 tablespoons of the Hatch chile barbecue sauce, 2 tablespoons of mayonnaise, and sliced green onions, along with salt and pepper to taste, makes a fine coleslaw and topping.