As I was dropping off my overnight bag at my mom’s place in Houston, Jonas, my eight-year-old nephew, ran into the room and said, “I have a new recipe for you! We made it this morning, and you’re going to love it.”

While it’s no mystery that I enjoy cooking, I came to this by way of my extended family, who all enjoy spending time in the kitchen, crafting dishes for themselves and those around them. My brother and his wife are no different, and they’ve raised both of their boys to be adept at cooking, as well.

Since they were both toddlers, my nephews have helped their parents cook. They also enjoy baking and preparing new dishes with their Grandma Texas (aka my mom). Whenever their grandma visits them in Oregon, she’ll send me pictures of the three of them whipping up new creations, both savory and sweet.

Likewise, when my nephews travel to Texas, my mom also makes plans for them to cook. Often, they’ll bake extravagant desserts. This makes my brother and I laugh as when we were kids, Mom’s kitchen was famous for wheat germ and carob, not candy and sprinkles. Though grandparents are supposed to be indulgent, and I recall my own grandma buying me Pop-Tarts, which my mom would have never allowed. 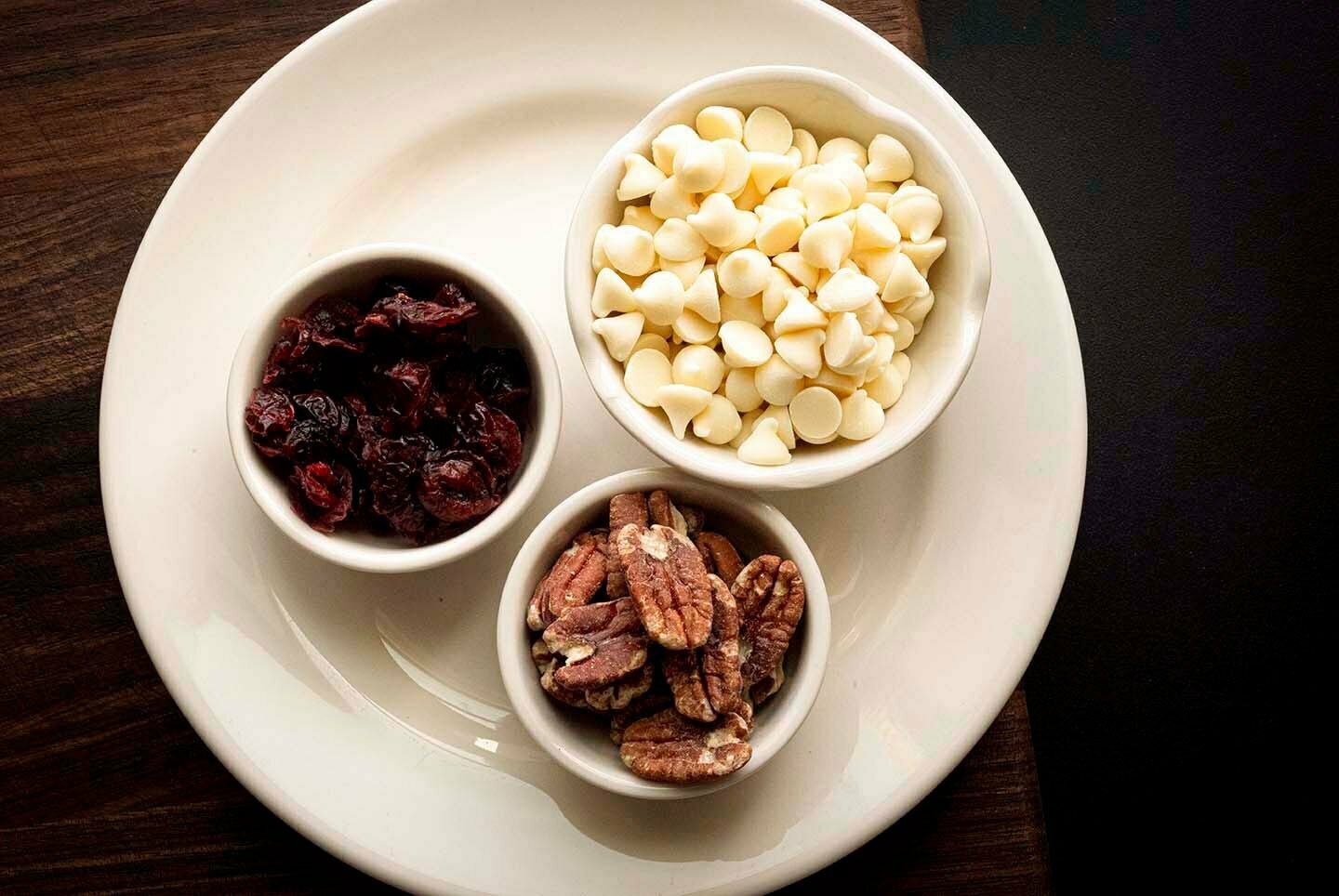 On this visit to Houston, my nephews had requested we eat French fries and see the Gulf of Mexico. I was happy to oblige, and soon after I arrived, we packed the car and headed to Galveston. Though, before we left, I asked Jonas what he’d made, and he said it was white chocolate scones. I told him I couldn’t wait to try them later.

After a full day in the sun and bellies full of cheeseburgers and French fries (we not only ate at the beach but also stopped at Whataburger on the way home for more burgers and fries), we were feeling lazy and content. When we got back to my mom’s, we had no more desire to eat, but the good thing about scones is they reheat well, and I knew they’d be just as delicious for breakfast.

The next morning, with my coffee I took one of Jonas’s scones. It was tender and fragrant with cinnamon and almond. I took a bite, and the top had a crunch from raw sugar, which gave way to the soft pastry studded with creamy white-chocolate chips. Despite the nutty scent, however, there weren’t any nuts present. I asked him if he’d used almond extract. He said that he had. I told him it was an inspired choice.

My mom chimed in and said that it was her basic oatmeal scone recipe, but it had been Jonas’s idea was to enhance them with the white chocolate chips and almond extract. After taking another bite, I thanked Jonas for his inspired additions and told him that they were some of the best scones I’d ever had.

Now, this time of year, I love to stir dried cranberries and pecans into my baked goods. So, when I made a batch of his white chocolate scones, I threw in these ingredients, too. The tart berries and crunchy nuts paired well with the scones, and in taste, they reminded me of a more rustic rendition of my mom’s decadent raspberry bars. 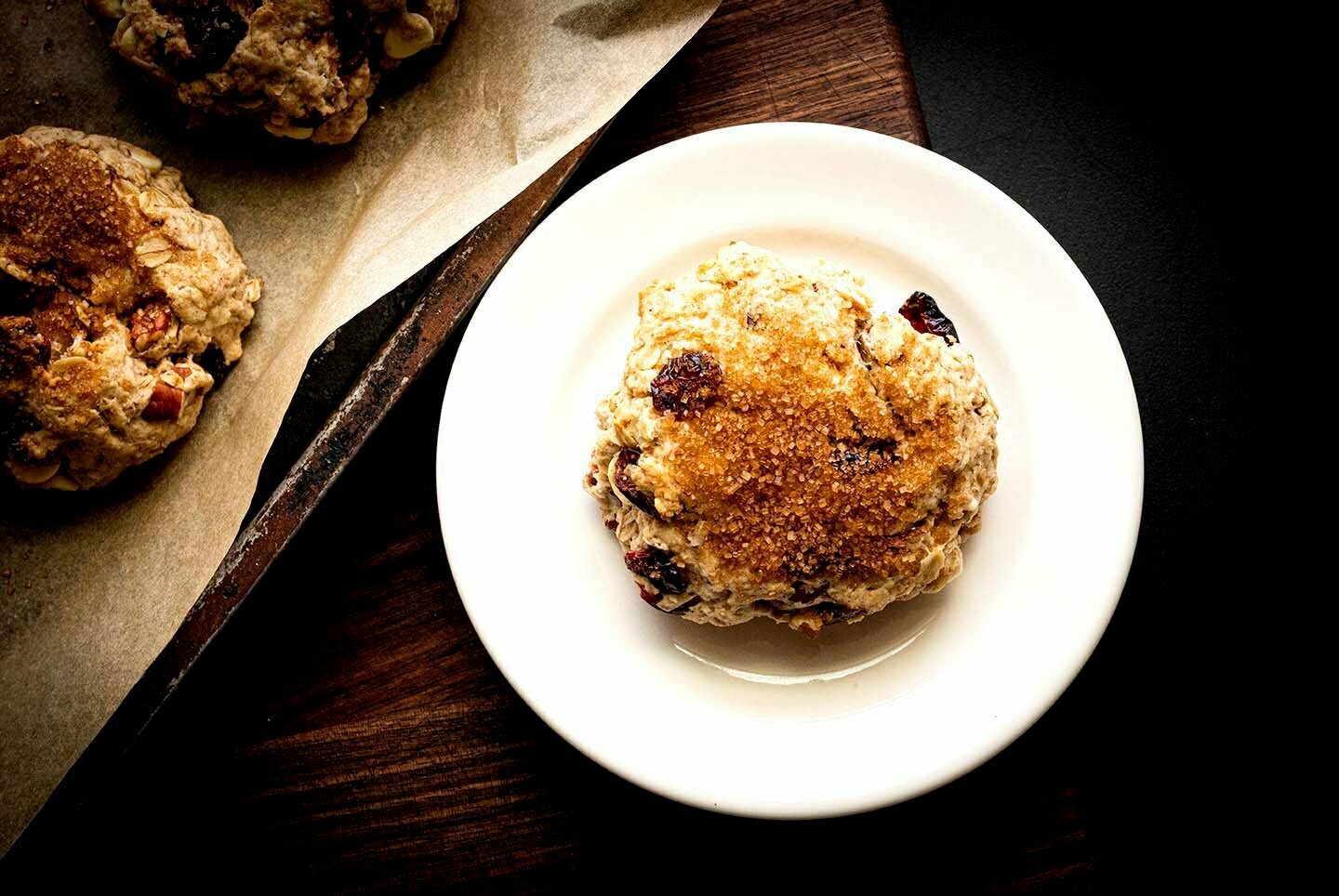 That said, these cranberry white chocolate scones can stand on their own without any comparisons, and they’re not only a fine collaboration between three generations but also a fine way to begin a fall day.