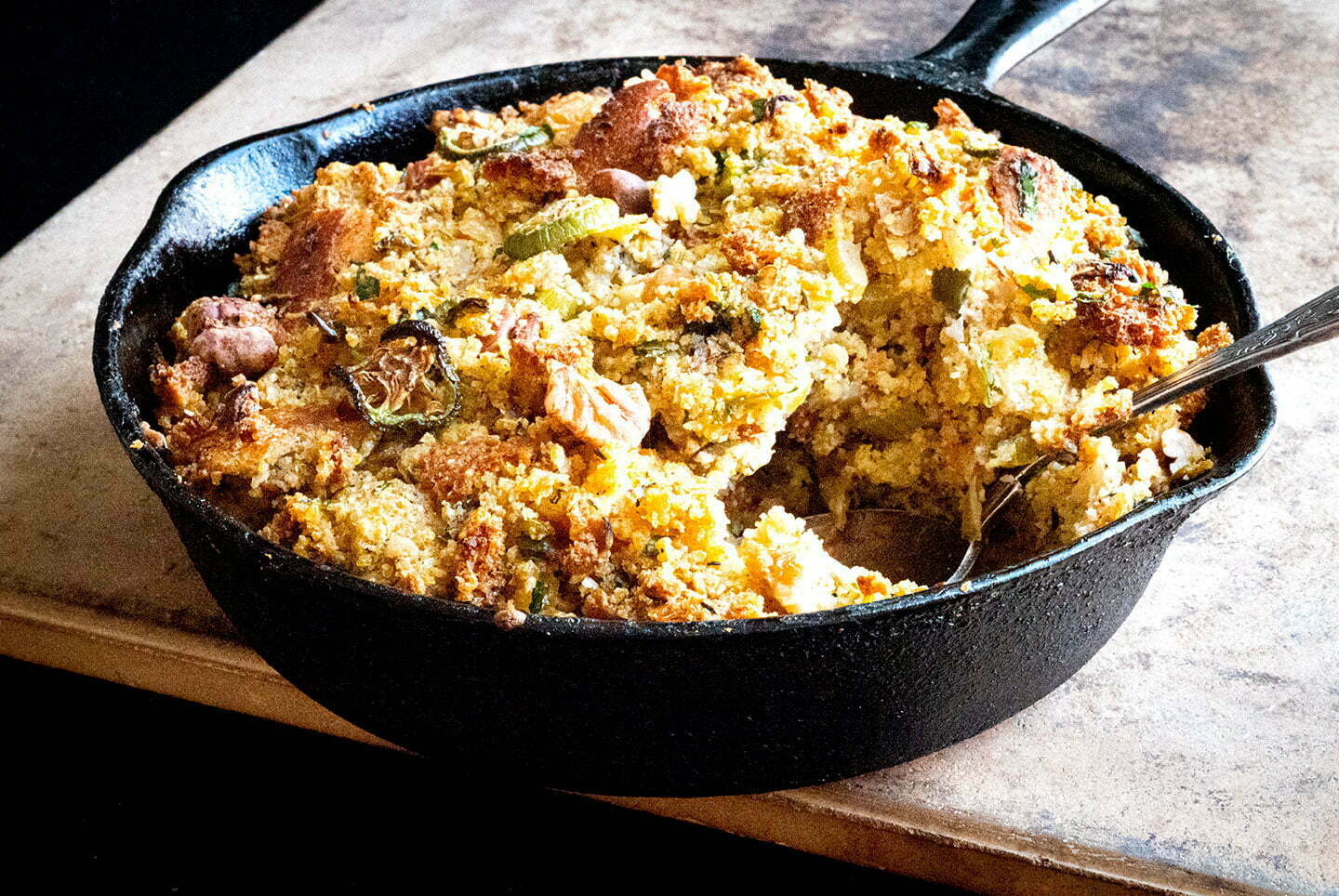 The act of stuffing a roasted fowl—be it chicken, duck, or turkey—reaches back to the Roman Empire. The idea is that the mixture of breadcrumbs, nuts, fruits, and meats will be greatly enhanced by the juices that flow from the bird as it cooks.

This is true, though, in more recent times, people have taken to cooking their stuffing outside the bird for safety reasons, since if the bird’s juices don’t cook all the way within the stuffing, one could get sick. When the blend of stuffing ingredients is prepared separately, it’s known as dressing.

Some have posited that Southerners, including Texans, are more inclined to serve dressing over stuffing. Though in my experience, it’s less the preparation method that determines the dish’s name, but rather what people are more used to calling it. For instance, even when I was in New York, most made this Thanksgiving dish apart from the turkey, though it was still called stuffing. Yet, the only vessel it had stuffed was a baking pan.

When looking at old Texas Thanksgiving recipes, they were more precise in their naming, with stuffing always cooked inside the turkey (or duck, which was also a popular Thanksgiving roast for Texans in the 1800s); dressing was prepared separately. What is interesting, however, is how little the recipes for a Texas-style dressing (or stuffing) have changed since that time. 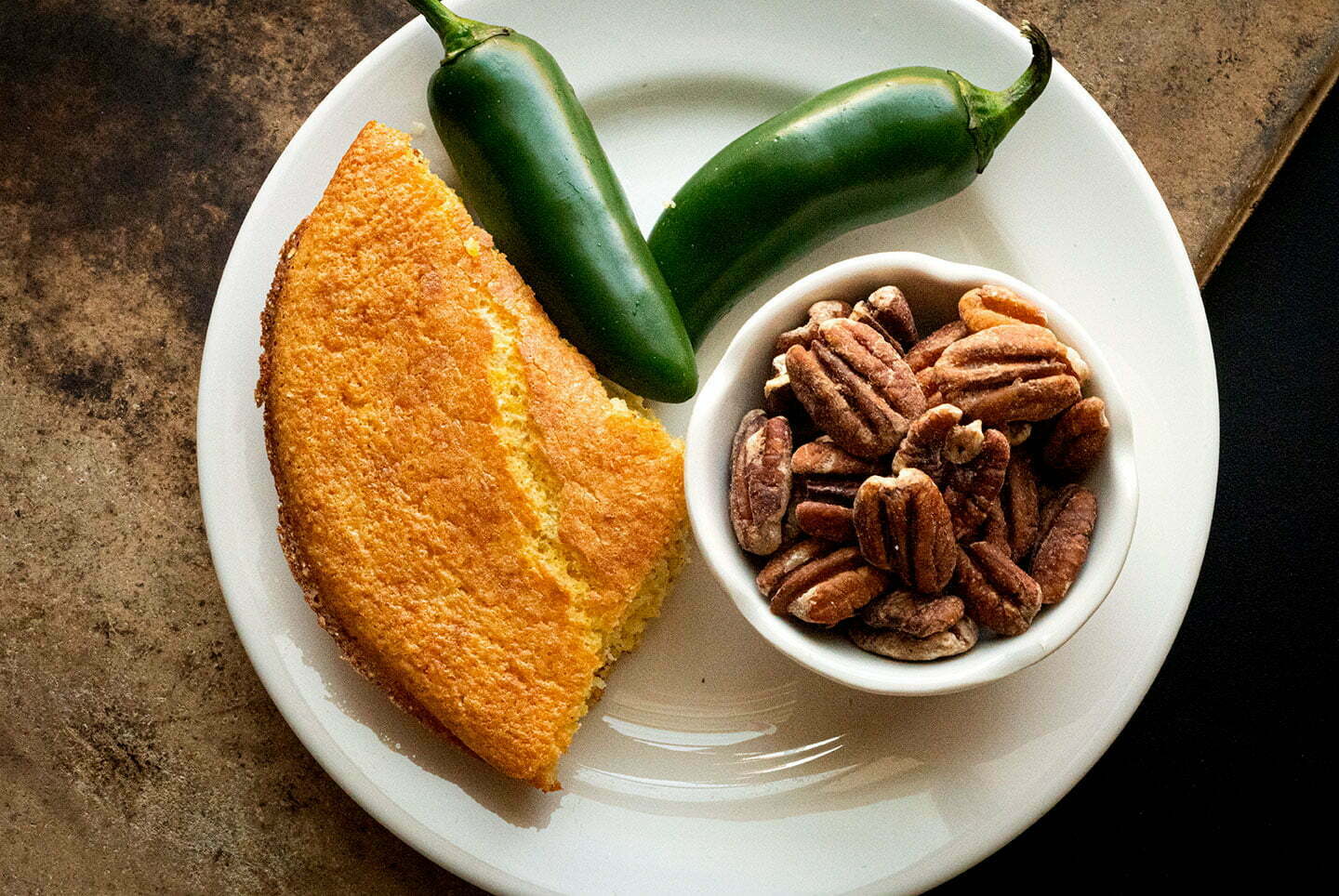 Most Texan dressings begin with cornbread, though plenty are augmented with wheat bread, too. The pieces of bread are at least a day old so they’ll be dry enough to absorb the liquids included. Celery and onions are added for flavoring, along with herbs such as sage, thyme, and parsley. Paprika is also a common ingredient.

In the 1800s, oysters were often included along with chestnuts. By the middle of the 20th Century, however, the oysters were gone and the chestnuts had been replaced by the Texans state nut, the pecan.

Sometimes people included sausage or bacon, and of course, many years later, tamales were also enjoyed in cornbread dressing. Fresh fruit such as apples and dried fruits such as cranberries added sweetness. Though pops of fresh corn and green chiles are common, as well. 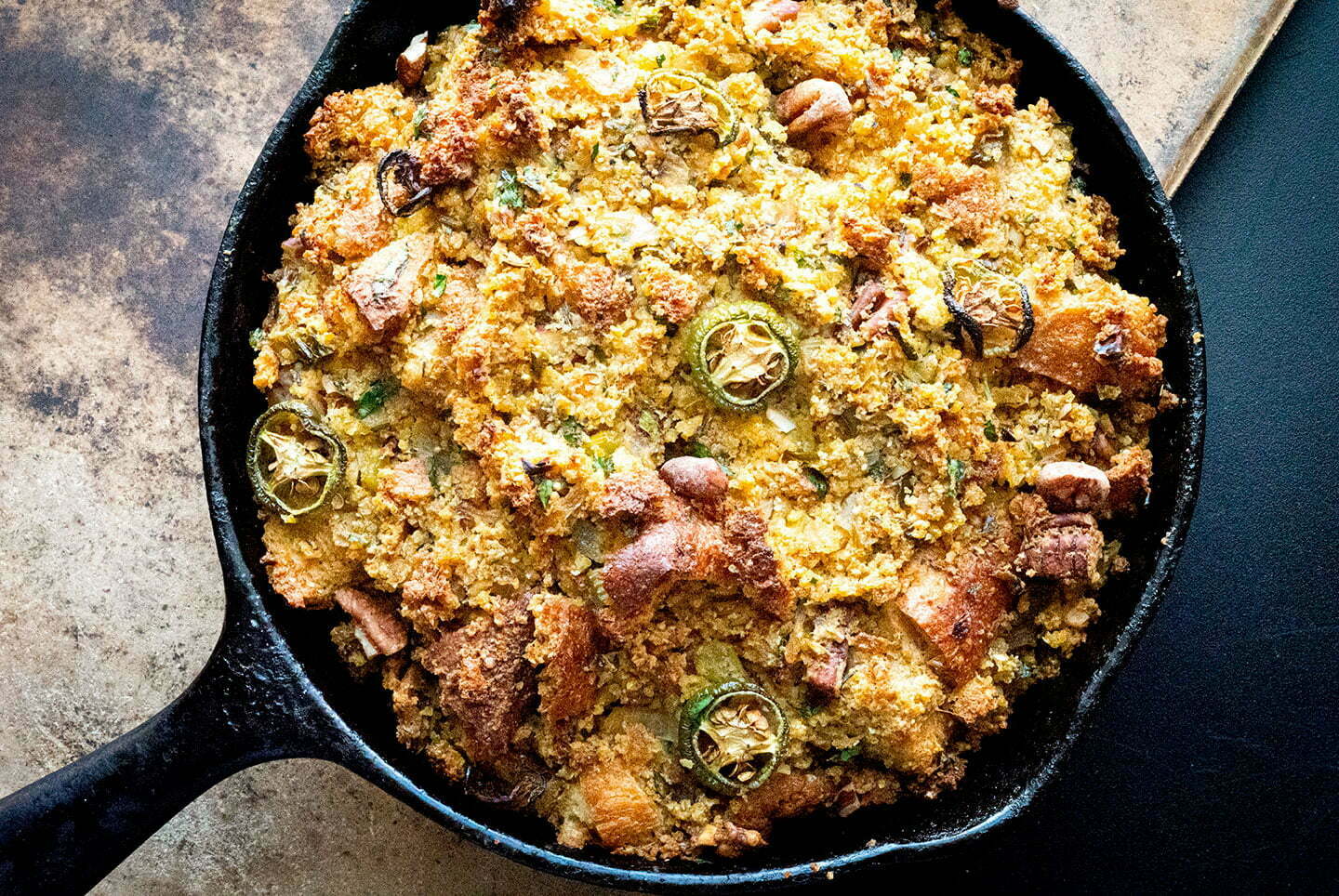 As you can see, there are many ways to make a Texas-style dressing. Here’s one that I enjoy, which skews more traditional, though the jalapeños give it a lively pep. I’ve kept it without meat, though chorizo, sausage, or even bacon would be good. And while the only fruits included are the peppers, dried cranberries would give it not only some brightness but a jolly pop of color, too.

For the cornbread, this recipe yields the correct amount. For my bread, I used a quarter of a baguette. If your bread is fresh, you can place it on a sheet pan and dry it in the oven while it heats for 20 minutes before proceeding with the recipe. While I kept this batch simple, add-ins such as fresh corn, dried cranberries, bacon, or sausage would be welcome if you wish to gussy it up further!